To the infinity and beyond. The most beautiful exhibition is coming back to London 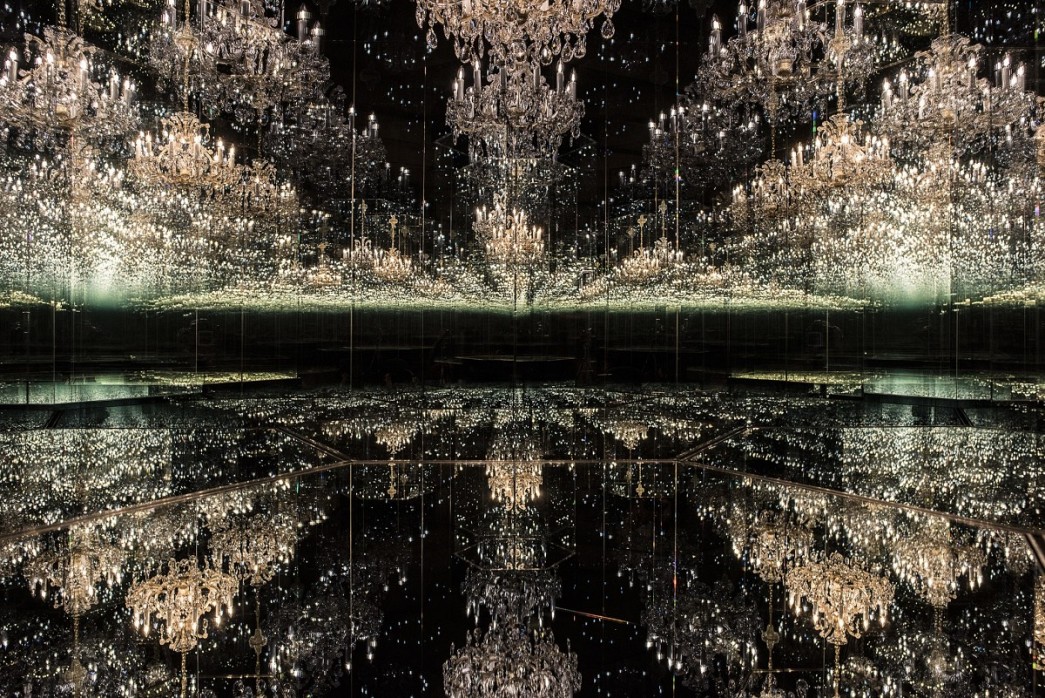 Victoria Miro gallery has announced a major exhibition of new work by Yayoi Kusama. Taking place across the Wharf Road galleries and waterside garden, the exhibition will feature new paintings, including works from the iconic My Eternal Soul series, painted bronze pumpkin and flower sculptures, and a large-scale Infinity Mirror Room, created for this presentation, Kusama’s twelfth exhibition at the gallery.

Throughout her career, Yayoi Kusama has developed a unique and diverse body of work that, highly personal in nature, connects profoundly with global audiences. Continuing to address the twin themes of cosmic infinity and personal obsession, the new works in this exhibition are testament to an artist at the height of her powers as she approaches her 90th birthday. Paintings from the artist’s celebrated, ongoing My Eternal Soul series will be on view at Gallery II, Wharf Road. Joyfully improvisatory, fluid and highly instinctual, the My Eternal Soul paintings abound with imagery including eyes, faces in profile, and other more indeterminate forms, including the dots for which the artist is synonymous, to offer impressions of worlds at once microscopic and macroscopic. 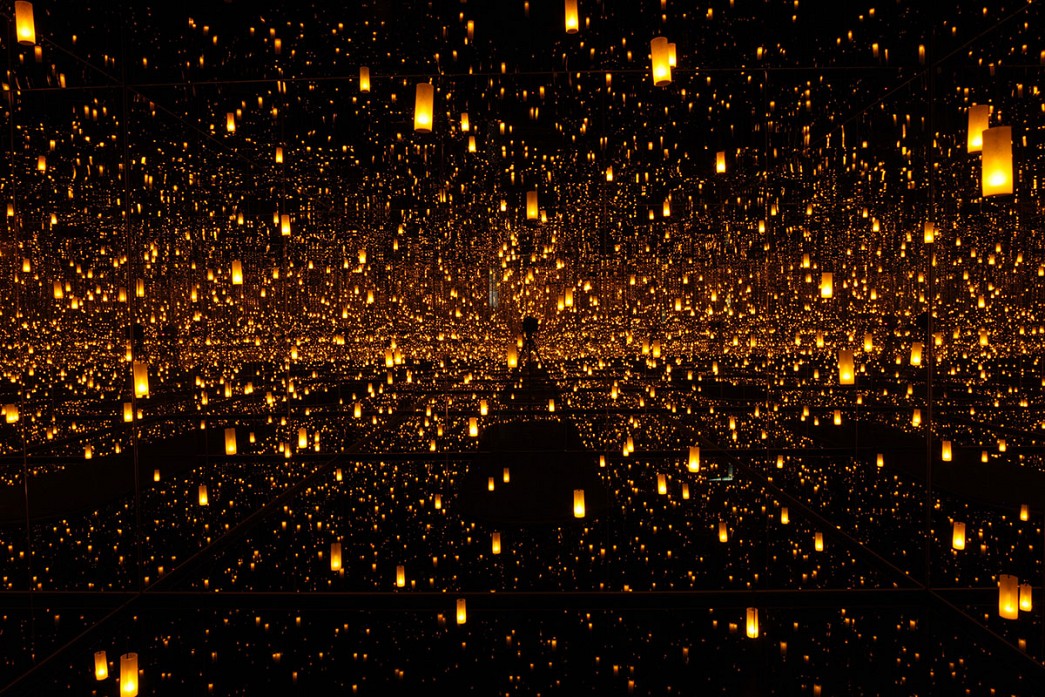 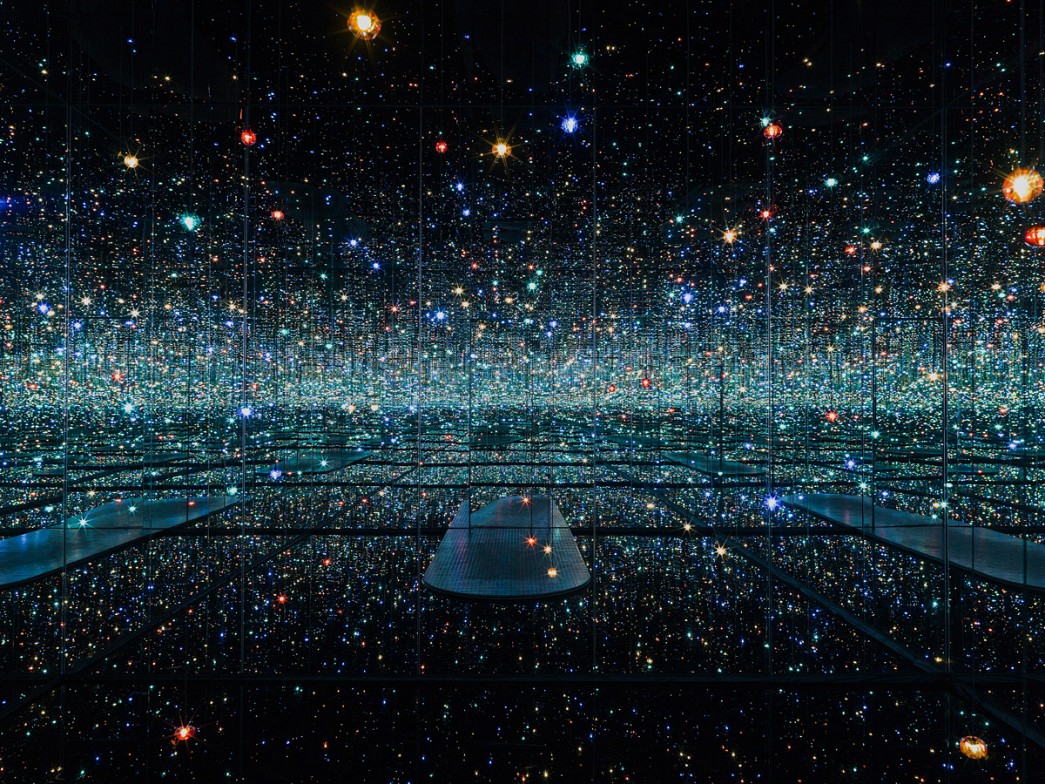 The pumpkin form has been a recurring motif in Kusama’s art since the late 1940s. Coming from a family that made its living cultivating plant seeds, Kusama was familiar with the kabocha squash in the fields that surrounded her childhood home. Writing about the significance of pumpkins in her 2011 book Infinity Net: the Autobiography of Yayoi Kusama, the artist notes: ‘It seems that pumpkins do not inspire much respect. But I was enchanted by their charming and winsome form. What appealed to me most was the pumpkin’s generous unpretentiousness. That and its solid spiritual balance.’ Works on display include new bronze pumpkin sculptures, painted in a vibrant palette of red, yellow and green, their curvaceous forms adorned with tapering patterns of black dots that create a sophisticated geometry. It was in early childhood that Kusama also began to experience the terrifying hallucinations that left her ‘dazzled and dumbfounded’ by repeating patterns that engulfed her field of vision, a process she referred to as obliteration. The pumpkin sculptures integrate many key aspects of Kusama’s practice: the repeating pattern of dots, connotations of growth and fertility and a palette of singular vibrancy. 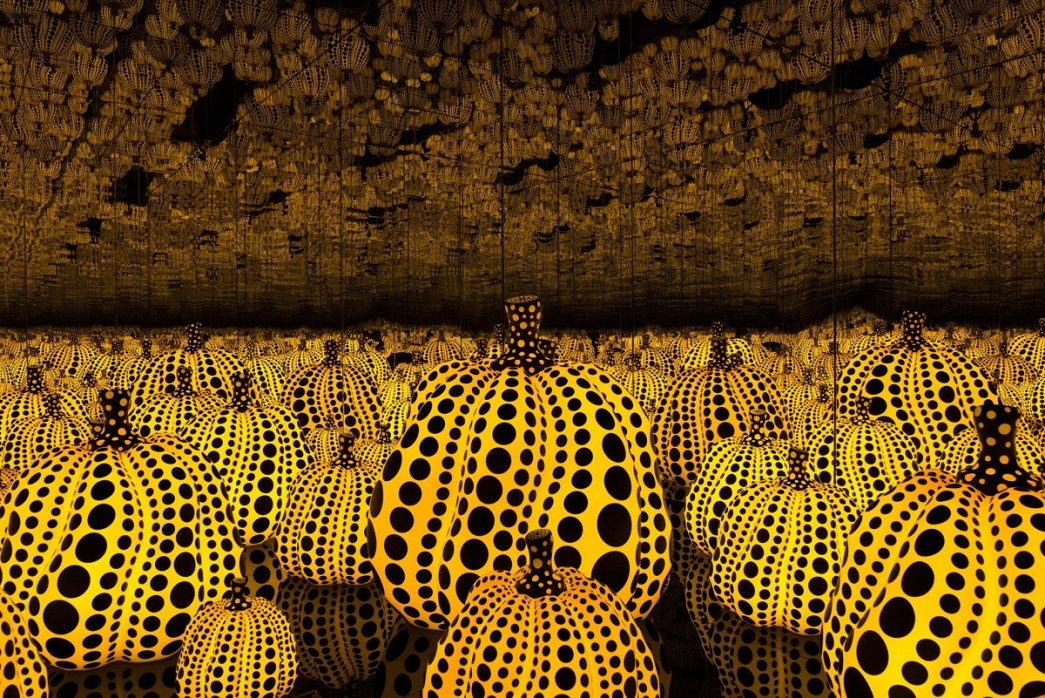 Kusama has painted pumpkins since childhood, and in Infinity Net recalls that ‘I would confront the spirit of the pumpkin, forgetting everything else and concentrating my mind entirely upon the form before me. Just as Bodhidharma spent ten years facing a stone wall, I spent as much as a month facing a single pumpkin. I regretted even having to take time to sleep.’ The works on display, created using the same palette of red, yellow and green, reveal myriad variations of the pumpkin form and its pattern of repeated dots. Varying from evocations of single pumpkins on patterned grounds to almost abstract, vertical forms, pulsating with energy, each painting carries its own distinct mood and character.

Like pumpkins, flowers have long been an important part of Kusama’s oeuvre and reflect the dualism between the natural and the organic found throughout her art. Sharing the artist’s distinctive bold palette, large-scale, painted bronze flower sculptures will be exhibited outside in the gallery’s waterside garden where, characteristically, they straddle a line between nature and exuberant artifice. At once simplified and fantastical, these forms, their surfaces covered with polka-dotted planes of vivid colour, are designed to be viewed from multiple angles, encouraging audiences to move around them. 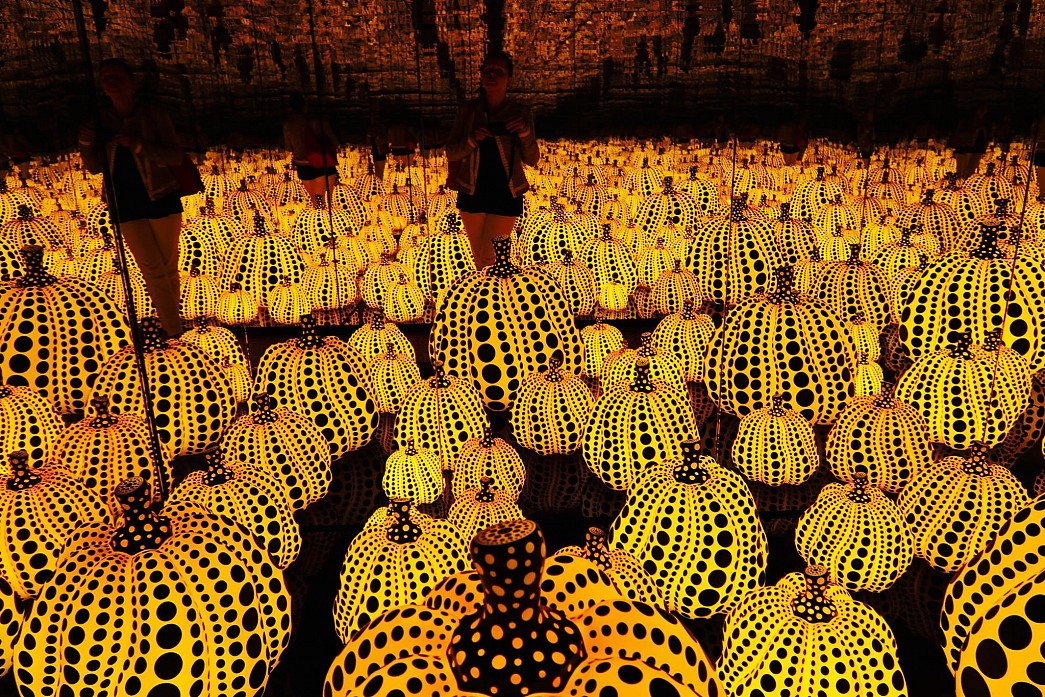 The exhibition marks the debut of a new Infinity Mirror Room, which will envelop visitors inside a large mirrored room with paper lanterns covered with polka dot patterns, which are suspended from the ceiling. Conveying the illusion of being unmoored in endless space, this large-scale work is the latest example of Kusama’s famed immersive environments. It offers a sense of infinity through the interplay of the rhythmic patterns of colourful spots covering the black spherical lamps and the surrounding mirrors.

Premiered at the 2018 Sundance Film Festival, Kusama – Infinity is a feature-length documentary, directed by Heather Lenz, that explores Yayoi Kusama’s career, from her conservative upbringing in rural Japan, to the years she spent in New York from the late 1950s to the early 1970s, where she became a vital part of the city’s avant-garde art scene and first showed her white Infinity Nets to critical acclaim, to her return to her native country in 1973 and the later international recognition of her iconic work.

Kusama’s seminal installation Narcissus Garden will feature in the Hayward Gallery’s major autumn exhibition Space Shifters, a thematic exhibition of work by more than twenty leading international artists whose work alters or disrupts our sense of space and re-orients our understanding of our surroundings. Originating in 1966, when Kusama first participated in the Venice Biennale, Narcissus Garden comprises mirrored spheres displayed en masse to create a dynamic kinetic sculpture. 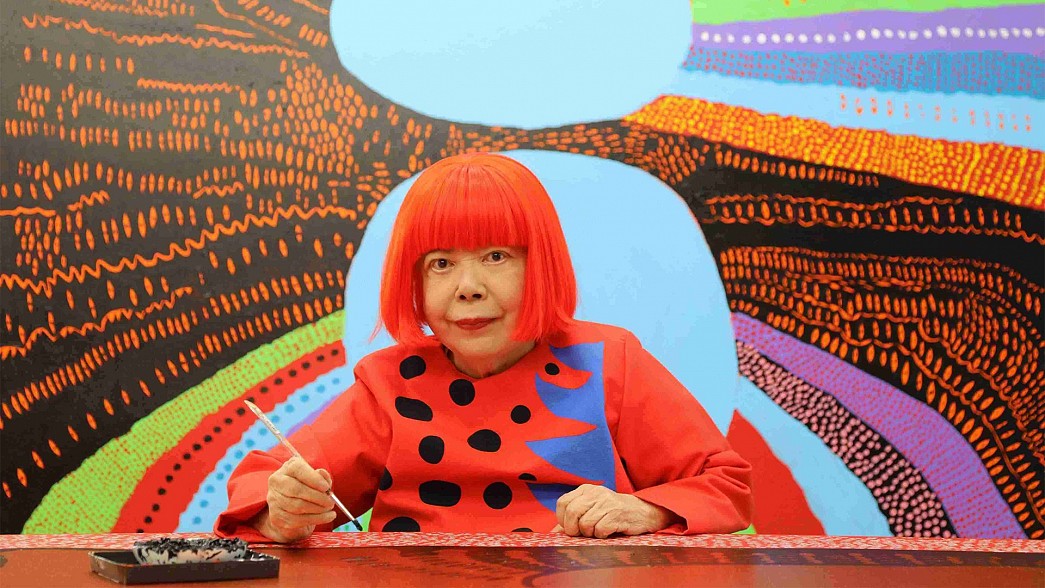 For almost seventy years Yayoi Kusama has developed a practice, which, though it shares affiliations with movements such as Surrealism, Minimalism and Pop Art, resists any singular classification. Born in Matsumoto City, Japan in 1929, she studied painting in Kyoto before moving to New York in the late 1950s, and by the mid-1960s had become well known in the avant-garde world for her provocative happenings and exhibitions. Since this time, Kusama’s extraordinary artistic endeavours have spanned painting, drawing, collage, sculpture, performance, film, printmaking, installation and environmental art as well as literature, fashion (most notably in her 2012 collaboration with Louis Vuitton) and product design.

Kusama represented Japan at the 45th Venice Biennale in 1993, and currently lives and works in Tokyo, where the Yayoi Kusama Museum opened in October 2017 with the inaugural exhibition Creation is a Solitary Pursuit, Love is What Brings You Closer to Art. Over the past decade there have been museum exhibitions of Kusama’s work touring the world in North America, Japan, Korea, China, Russia, Brazil, Argentina, Mexico, Chile, Spain, England, France, Denmark, Norway, Sweden and Finland. In 2016 Kusama was selected as one of TIME Magazine’s World’s 100 Most Influential People. She was also named the world’s most popular artist by various news outlets, based on figures reported by The Art Newspaper for global museum attendance.

In 2020 Kusama will create her first permanent UK installation for the new Crossrail station at Liverpool Street. Titled Infinite Accumulation, the site-specific work develops her instantly recognisable motif – the polka dot – into a series of flowing, mirrored steel sculptures, each up to 12 metres wide and 10 metres tall. Undulating tubular rods will support a sequence of highly polished spheres, guiding passengers from the public spaces outside the station into the eastern entrance of the Elizabeth line station at Liverpool Street.

Yayoi Kusama has been represented by Victoria Miro since 1997. This is her twelfth exhibition at the gallery. 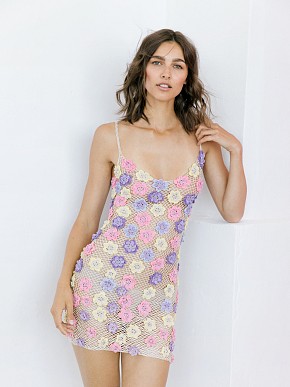